In research and development, our IMOS physicists work freely on various topics in micro and nano structuring or develop suitable optics for your project. With our development work, we form the technological future with you.

When gamma radiation from space hits our atmosphere, “Cherenkov light” – extremely weak and short flashes - arises. The FACT telescope (first G-APD Cherenkov telescope) on the island of La Palma reflects this light with its 9 m² mirror into a camera that takes two billion images a second. For this camera, hundreds of precision optics were combined and produced in synthetic material in accordance with design recommendations from the ETH University in Zurich. 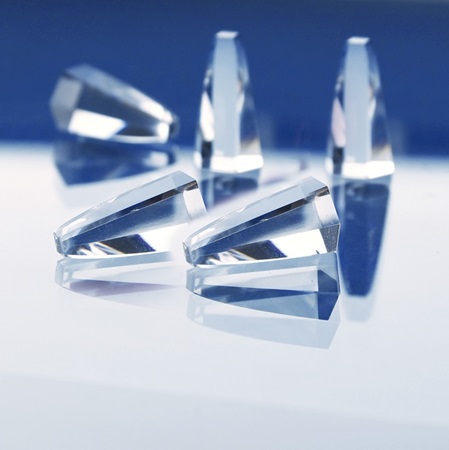 Driven solely by sunlight, the solar car of the University of Bochum raced through Australia with IMOS optics. This was simultaneously the start for a planned round-the-world trip – using only the power of the sun.  30 students of Prof. Dr. Friedberg Pautzke and technical leader Dipl.-Ing. Christoph Bönneken have made the project for the age of solar mobility reality.

After intensive research and development work, IMOS has its “top optics” in its hands. The micro-cubic structures unique in the world came about in the course of the Rural Development Programme (RDP) and the European Regional Development Fund (ERDF) “The best in the state! Technology leaders for Baden-Württemberg”. With acceptance onto the support programme, the business innovation of IMOS was confirmed. The patented, novel, curved retroreflector was developed specifically for the road and automobile industry. Due to the curvature of the retroreflection structures, the observer receives a reflection signal even with a large variety of observation angles. Cubic microstructures on a curved surface

The German astronaut, Alexander Gerst, with the DESIS on the International Space Station (ISS). Precision optics from our range were installed in the hyperspectral earth observation instrument, DESIS, which is on the International Space Station (ISS). In this way, scientists in space can keep an eye on the level of health of our earth. Due to the effective collimated beams, our optics ensure ideal calibration conditions. DESIS on the ISS This lens was developed by our physicists for signal lamps on ships. With it, light signals can reach a particularly high range. These optics enable a signal light through 360°.

Working on an environmental protection project particularly excited the IMOS physicists. They developed a metal optic in the area of "precision farming". This enabled the plant growth and the development of weeds to be recorded by the optic and then digitalised. Now the use of spray can be dosed with the help of these data. 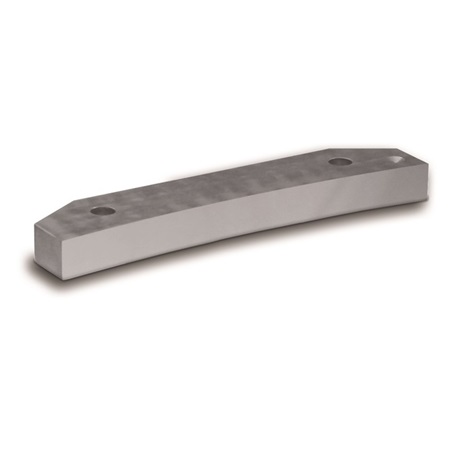 When magnified under the microscope, the latest IMOS development looks like a giant compound eye of a fly. The round lenses actually do consist of numerous tiny and exactly positioned micro-optics. Depending on the application area, each one has a diameter of approx. 0.2 to 2 mm and as a complete microlens array they have outstanding, extraordinarily precise, light-forming properties. Depending on the intended light pattern, the arrays are hexagonal, cubic or concentric and arranged closely together. IMOS even guides the light according to your requests and specifications. Clever people need IMOS optics. In support of a spectroscopy project for the “Jugend forscht” (young researchers), IMOS made several reflection optics available for a young research group in a secondary school.

At the national final of “Jugend forscht” in Erlangen, the young researcher Tobias Gerbracht not only received a special prize, but also “first prize for the best interdisciplinary work in 2017”. IMOS supported the innovative project with extremely accurate, precisely sized reflectors. The final-year pupil from Wuppertal developed a mobile measurement station to detect air pollution. The self-made apparatus consists of a special lamp that shines onto a fixed IMOS reflector 2 km away, which then reflects the light to a telescope. Based on the incoming light spectrum, the level of pollutants in the surrounding air can be determined.

Together with the PTB and supported by the Federal Ministry for Economic Affairs and Energy (BMWi), IMOS has developed its own measurement method. The PTB profile scanner has multiple rotary and linear tables. The bending beam sensor (cantilever) is attached separately to a three-axis precision piezo stage. The position of the sensor is determined using three plane-mirror interferometers. The measuring beams of the interferometers cross each other at the sensing point. In this way, free positional measurement is possible without Abbe error. The output signal of the sensing tip is evaluated with a programmed rule algorithm. This ensures an automatically constant sensing force between sensor and measurement object. With this extremely high nano resolution, it is particularly important to as far as possible prevent noise in the measuring signal due to the sensor holder.

Dr. Min Xu can rightly be proud of her development work. Under the leadership of Dr. Uwe Brand at the PTB, contact measurement of microstructures with a large aspect ratio (resolution of 6 nm with a frequency of 20 kHz) was successful. PROJECT FOR THE NEAR-EAST

A solar panel optic that follows the sun without rotation, that concentrates the light but can still lie flat on the building.

The variety of technical possibilities IMOS offers its customers is best explained using an example. For the Near East, the task for the developer group was to design a light concentrator that can simply be mounted on buildings for power generation. But the sun describes an arc in the sky during the day. Therefore, the IMOS physicists designed a cylinder optic that can be adapted to the current sun position purely through vertical and horizontal shifts and thus collects the optimum amount of sun. In the process, the light is concentrated onto a 1.0-mm silicon strip. The cylinder optics were produced in synthetic material and directly applied to large glass panels. 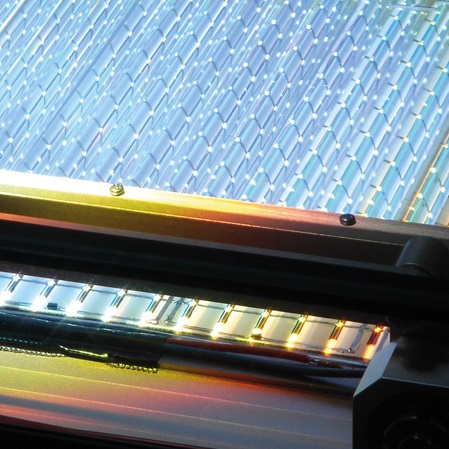